This post is based on material from my new book, How to Write an Essay.

People seem to find essay introductions really hard to do.  One of the reasons may be that you think you have to write it first.

Leave the introduction (and the conclusion, but we'll do that another time) until you've finished the body of the essay.

You know that the introduction has to be good, don't you?  Your tutor or examiner is reading dozens – at times, hundreds – of essays, often on exactly the same topic.  How are you going to make them sit up and take notice?  How can you put them in the right frame of mind to even think about giving your essay a better grade than the last one?

To begin with, don’t do what everyone else does.

Here are five types of introduction that tutors and examiners see frequently.  These are the introductions guaranteed to make their hearts sink.  Avoid them.

This is the kind of introduction that simply fills the space with generalised, more or less meaningless sentences.  It’s like clearing your throat before saying anything worthwhile.

This introduction restates the question you’ve been set.  Whoever wrote the essay question presumably knows what the question is; they don’t need you to remind them.

Samuel Beckett’s play ‘Krapp’s Last Tape’ contains elements of both comedy and tragedy.  Many    commentators and critics have different opinions about whether comedy or tragedy is the most    important element of the play, and few have come to any agreement. It is important to try to    understand whether the play is more of a comedy or more of a tragedy.

Clarifying the question can be a useful strategy as part of your introduction, as we’ll see.  But simply restating it and going no further is inadequate; the introduction can, and should, do more to draw the reader in to your essay.

This introduction gives the details of the book (or play, or country, or historical figure, or chemical element, or equation) that you’re discussing.  Perhaps essay writers use this kind of introduction because it reminds them of the book reports they wrote in junior school; it feels comfortable.

Samuel Beckett’s play ‘Krapp’s Last Tape’ was performed first at the Royal Court Theatre, London, on 28 October 1958.  It starred Patrick Magee, was directed by Donald McWhinnie and ran for 38 performances.

This introduction tells the reader what they probably already know.  It doesn’t lead them towards your thesis statement. In fact, it doesn’t lead anywhere.

Some textbooks advise essay writers to tell the reader what you propose to do in the essay.  The same textbooks will probably then tell you to do it in the middle part, and use the conclusion to say what you’ve done.

This is the famous ‘tell’em’ principle:

As with restating the question, signalling your intentions – and the structure of the essay – is a useful strategy.  After all, it’s what the blueprint in your thesis statement is doing: indicating how you propose to answer the question.  But on its own, the ‘tell ‘em’ principle is boring.  And, as the opening sentence in your introduction, it’s deadly.

In this essay, I shall attempt to show that elements of comedy outweigh elements of tragedy in Samuel Beckett’s play, ‘Krapp’s Last Tape’.

(Attempt to show, by the way, is another killer.  Only attempt?  How confident and interested does that make your reader feel?  For the same reason, avoid saying: hopefully, this essay will demonstrate...)

The Oxford English Dictionary defines ‘tragedy’ as “a play or other literary work of a serious or sorrowful character, with a fatal or disastrous conclusion: opposite to comedy.”

Anyone can look up a word in a dictionary.  And a dictionary definition probably doesn’t take into account the context in which you’re discussing the word.

This kind of introduction makes sweeping generalisations about the topic, mostly unrelated to the thesis statement.  Maybe writers feel that this is a way of drawing your reader into the essay, like a long, slow zoom in at the start of a movie.

Since the start of recorded history, men have stood on stages before large audiences and acted out the sad stories of their times.

In fact, this kind of introduction is as much of a cliché as the (intentional) cliché that opens Star Wars.

A long time ago, in a galaxy far away...

Avoid clichés - like the plague, I was going to say!

The best way to set about writing your introduction is to create a mini-plan.

In its basic form, this sequence has four stages.  You can remember it using the letters SPQR.  If you’re a historian, you’ll know that this is the motto of the Roman Empire.  If you’re not, you now know that these letters stand for Senatus PopulusQue Romanus (‘the senate and people of Rome’).  They are a good way of remembering the sequence of an introduction. 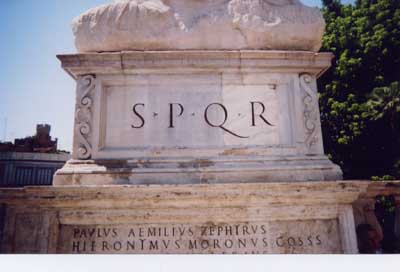 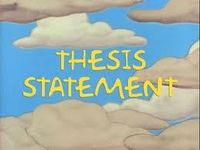 You do have a thesis statement, don't you?

Your thesis statement is your answer to the question.  It's made up of three parts: the subject of your essay; a precise claim that you are making about it; and a 'blueprint', which signals the structure of your essay. 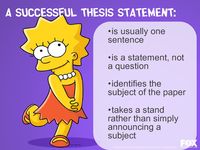 Here's a thesis statement answering the question:  'Is Beckett's play Krapp's Last Tape a comedy or a tragedy?'

Although containing many elements of traditional popular comedy, Beckett’s play ‘Krapp’s Last    Tape’[subject]ultimately functions as a tragedy. [precise statement] The play’s central character displays features commonly associated with tragedy: both hubris and hamartia.  The structural plan of the play reinvents the tragic movement through peripeteia, in which ignorance becomes knowledge.  Krapp’s situation inspires both fear and pity as we witness both his hopelessness and his capacity to endure. [blueprint] 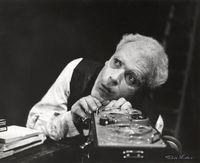 Now, here’s an example of an introduction modelled on the SPQR sequence.  It opens an essay answering the question:

Discuss the causes of stereotyping in the mass media.  To what extent do they influence social attitudes?

[Situation] Stereotypes are extremely common in British society. Nationality and race, class, gender and sexual orientation are all subject to limited and rigid social descriptions.  [Problem] These stereotypes have historically been perpetuated in the mass media, particularly in the tabloid press and television, where situation comedy has often depended on stereotypes for its effects. [Question]  Sociologists have gathered evidence for this process, and examined its causes.[Response: thesis statement]  The most prominent cause of stereotyping appears to be the need for media owners to mirror the values of their target markets.  Through market research, intervention in the creative process and audience evaluation, the mass media can be seen to reinforce already existing stereotypes and perpetuate them.

A variation on the SPQR model was developed by John Swales, a British linguist who has worked at the University of Michigan since 1985.  In his book, Genre Analysis, published in 1990, Swales identifies four moves that academics typically make in introducing their papers.

This sequence has become known, unsurprisingly, as the Four Moves model.

Here’s a simple example of a Swalesian introduction.  (Thanks to Rao, Chanock and Krishnan for inspiration here.)  The essay question is:

What can be done to reverse the loss of ‘social capital’ in developed societies?

[Move 1] As countries develop from rural, locally organised societies towards urban centralisation, social capital – the networks, values and norms linking individuals within communities – is increasingly lost.  [Move 2] Sociologists such as Smithfield and Grigson have documented the increasing incidence of loneliness, mental illness and family break-up that results in newly urbanised societies. (Smithfield, 2003; Grigson, 1999)  [Move 3] As yet, however, little research has been done to investigate how such a loss of social capital can be curbed or reversed.  [Move 4] This essay examines three examples of projects aiming to restore social communities in London, Nairobi and Adelaide.  It concludes by arguing that new models of social cohesion are needed to reflect the diversity of modern urban societies.

You should complete your introduction by stating your thesis statement in full.  The introduction thus ends with your precise claim and a signal of the structure of your essay.

Once you have a strong structure for your introduction, you can open it with a ‘hook’; a sentence that will catch the reader’s attention and make them want to read on. 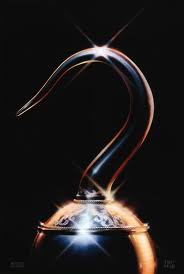 You’ve a number of options.  You could start with a bald, striking statement of fact.  You could give a vivid example or illustration of your thesis statement.  You could quote someone who said something controversial.  You could offer a puzzling or ambiguous example.  You could tell a (very brief) story.  You could even ask a question.

Whatever you decide to do, try to find an opening sentence that you can be sure nobody else will offer.  Of course it should be relevant and true; but it should also be striking and arresting. 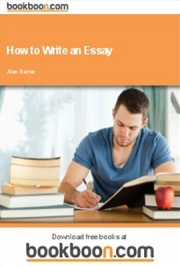 For any essay, introduction is one of the most important part. The reader is able to know what to expect in the essay.

I need a website like this I think you can help me to find. best cheap speakers for turntable