This post is based on material from my e-book, How to Write an Essay.

A good thesis statement stands behind every good essay.

Now, about thesis statements, I have good news and bad news.

The bad news is that creating a thesis statement tends to be the toughest part of the essay assignment.  Finding something interesting to say is rarely easy; after all, lots of people have already said lots of interesting things.

But the good news is that the task involves very little writing.

And the really good news is that, if you get this bit right, writing the essay itself becomes a whole lot easier.

Ok. So what is this thesis statement, anyway?  Well, it’s a statement that should:

To what extent does Michael Porter's Five Forces of Competitive Position model provide an adequate perspective for assessing the competitive strength and position of a commercial enterprise? 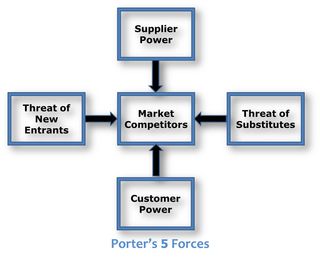 This statement doesn’t answer the question; it merely outlines the scope of the essay.

The question asks:  “To what extent…?” At its most basic, your answer might be ‘wholly’, ‘partly’ or ‘not at all’.   The position you choose will depend on your study.

You have to decide what you think about this question.

Your thesis states your position in the essay.  So, by definition, you can take only one position.

This can be a challenge, especially if you’ve been told that your essays should present  ‘balanced arguments’. 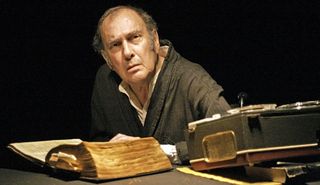 Beckett’s play contains elements of both comedy and tragedy.

Danger!  You’re beginning to create a double focus.  And you’re not answering the question.

That tiny word ‘or’ demands that we choose between comedy and tragedy.  Perhaps, after further study and thought, you decide:

Better.  (That 'although' clause is clever: it suggests the balance in the argument, which you can now tip by stating your single idea.)

Now all you need to do is support that argument.  You need to create a ground plan.  More on ground plans shortly.

Does your thesis statement pass the ‘so what?’ test?

Imagine that you’re answering this question.

Discuss the use of imagery in Picasso's Guernica. 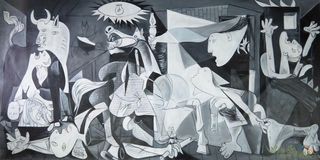 Your thesis needs to make a claim that’s disputable: a claim that somebody could disagree with.  Suppose you write:

Picasso’s painting Guernica is one of the masterpieces of twentieth-century art.

Who would dispute a statement like that?  It’s almost guaranteed to provoke a ‘so what?’ response (if not a slightly less polite ‘duh’).

That word ‘discuss’ in the question is a real problem.  (And it comes up often in essay questions.)  ‘Discuss’ could mean – well, just about anything.  But this question gives us two other clues.   One clue is about the scope of the question:  you’re asked to consider imagery in the picture, rather than colour, structure or technique.   Another clue is in that tiny word ‘use’.   You’re being asked, not just about what the imagery is, but how Picasso uses it.

In Guernica, Picasso uses conventional imagery to illustrate the horror and injustice of fascist militarism.

Much better.  You could imagine a reader responding with:  “Oh, really?   Convince me!”

Which is just the response you need.

You’re answering the question; and you’re making a single, disputable point.   This is a good working thesis.

Once you have a working thesis, you can begin to gather together the material that you could use to develop it into an essay.

As you develop your ideas, gather information, make notes and think further, you’ll need to refine your thesis statement.  Where do you disagree with other scholars that you’ve been reading?  What do they seem to miss?  How do your ideas contribute to answering the question?

The refined version will be longer than the working thesis.  It’ll contain:

What were the causes of the 1926 General Strike in the United Kingdom? 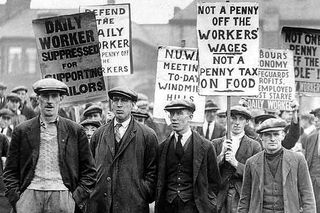 And here is one student’s answer.

The General Strike of 1926 [subject] had three main causes [precise claim]: the depletion of coal supplies as a result of the First World War; economic measures that harmed the UK’s ability to trade and export; and rapidly worsening conditions among miners [ground plan].

The writer has listed three causes in the ground plan; we now expect the essay to cover those three causes, in that order.

How original is ‘original’?

Students often worry that their thesis statements aren’t original.  And your tutor or examiner will certainly mark you down if they can see that you’re simply repeating ideas you’ve read in a book, or in other essays.  They want to see evidence that you’ve thought about this material and developed some ideas of your own.

But you shouldn’t be too concerned about originality.  As we said at the start, it’s very hard to come up with ideas that are startlingly new.  Avoid plagiarism; acknowledge others’ ideas; and offer some ideas of your own.  Try to be a bit contentious: a bit argumentative.  Have the courage to offer your own ideas, but be disciplined enough to offer reasoned arguments to support them.

The important point is to demonstrate that you’ve thought about the question.  Your essay should show evidence of that thinking.

How to write an introduction

How to write the conclusion

Interesting infographic how to write an argumentative essay http://www.essay-profy.com/blog/how-to-write-an-essay-writing-an-argumentative-essay/﻿

This ia a very good guidance. Thank you for the post.