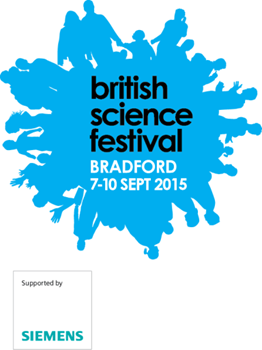 An inspirational day last week at the British Science Association, working with the winners of this year’s BSA Award Lectures.  The BSA has presented these lectures since 1990; notable past winners include Professor Brian Cox (2006), Maggie Aderin-Pocock (2008) and Richard Wiseman (2002).  This year’s speakers are absolutely in that league.

The lectures embody the BSA’s vision of a world where science is at the heart of society and culture.  They recognise and promote the work of early-career scientists in the UK.  Each one aims to engage a broad audience, without at any point diluting the seriousness or complexity of its material.  Somewhere in the tension between those two imperatives is born the sense of wonder that makes a lecture zing.

Here are seven ideas that I took away from the day, and that any science presenter might find useful.

Let the material find its own shape.  Every theme, every topic, every message, demands its own structure.  But we can lay down three broad principles.

Create a mystery.  The more intriguing, the better.  It doesn’t have to be a burning controversy.  A life cycle with intriguing gaps; a manufacturing process that remains a mystery to this very day; a mismatch between theory and findings; all of these can give you the narrative hook that will capture your audience’s attention.  You might find the suspense you’re looking for in the gap between hypothesis and results in your own research.

Give us meaning, not just information.  Your audience will appreciate simple explanatory models – either physical or mental.  We’re not very good at appreciating statistics (how big is a trillion?).  We are extremely good at deriving meaning from examples – even if they’re not exactly representative.  Analogies and metaphors are useful.  Another powerful technique is to talk about physical elements as if they’re characters in a story.  “The particles get really hot and want to get as far from each other as they can.”

Make it relevant.  Of course, you may want to show the social, economic or political effects of your research.  But imagination is just as relevant as utilitarian outcomes.  If you can make your audience feel awe, or wonder, or intrigue, you’ve strengthened their bond to the natural world, to their fellow humans or to the scientific project.  No bad thing.

One very obvious way to do that, of course, is to – 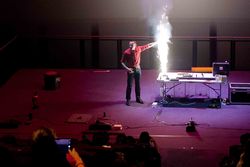 Invoke the ‘wow’ factor.  Every subject will offer its own ‘wow’ opportunities.  It might be a spectacular demonstration, a dramatic visual analogy or a mind-blowing statistic (“for a few moments, this is the hottest place on the entire planet.”)  Potential applications for an untried or forgotten technology will often create a tingle.  The point about ‘wow’ moments is that they make us see things differently.  If you can shift people’s perceptions in some way, the shift in their thinking will follow.

Embrace controversy.  This is the toughest one.  Some issues are inherently controversial; others may provoke unanticipated emotional responses.

We had powerful conversations in our group about how public expectations of scientists can frustrate their plans to communicate their ideas.  We (lay members of the public, like me) want scientists to give us definite answers; and we distrust them when they try to do so.  We want scientists to solve moral and ethical issues for us, and then criticise them if they dare to do so.

The best thing you can do is show that you, too, are a human being.  Demonstrate the implications of your research, good and bad.  Point out how far the science can go, and where morality or law must take over.  Don’t be afraid to take a stand, if you believe in it and can justify it.  Above all, show us why your material fascinates you.  Excitement is contagious.

Here are the 2015 winners and their respective awards.

Each winner will give a talk at the British Science Festival in September in Bradford.  You can find out more about their lectures here.